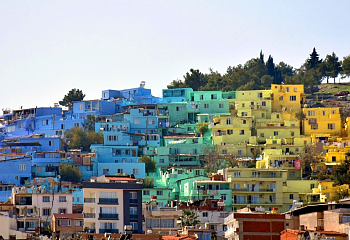 A major manufacturer of paints, has opted for an exceptional marketing action. The company decided to paint houses on a hill in Kusadasi in order to draw attention to their products while demonstrating how beautiful and durable it works.

The houses in Kusadasi, which belongs to the province of Aydin, were painted in all colors of the rainbow. The project was implemented with the help of volunteers and more than four hundred houses have been painted, turning the whole hill into a true multi-colored wonder, which is now visited by thousands of tourists.

"This is additional advertising for our city. People post photos on social networks, which is a very nice sight, "emphasizes Aydin's mayor.

Similar actions have taken place in the past in Istanbul, Hatay and some other Turkish cities.

No smoking: Turkey is struggling with bad habits
1371

The saffron harvest started in Turkey.
1072

-Made in Turkey- on all Turkish products
1088

Turkey to use lira in property purchases, sales, rents
1103

Antalya invites you to refresh yourself in the Ice Museum
1148