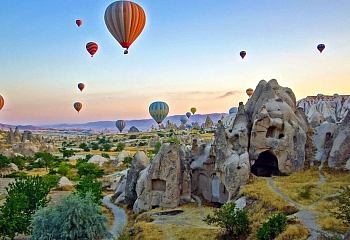 The Turkish Republic literally surpassed itself in 2017. Businesses are going very well around the country, which is clearly confirmed by statistical data. Throughout the year, economic indicators are growing and in terms of economic growth, the country has bypassed all the states of Europe and many world powers, leading to bewilderment of international rating agencies, which repeatedly changed their forecasts throughout the year. Although the figures for economic growth were optimistic, Turkey outperformed them all month by month.

Therefore, the economic growth in the first quarter of this year was 5.3%, in the second it was 5.4% and in the third it was 11.7% which was the highest figure for the last six years.

According to preliminary data, the dynamic nature of the Turkish economy will continue to grow in the fourth quarter.

The GDP reached 11.7% in the third quarter which is an excellent indicator because the average annual growth was 5%.

Also, the unemployment rate got declined in Turkey. Therefore, positive data registered regularly. The unemployed was reduced by one percent per month. Currently there are only 3.4 million people left who does not have official work.

Since the beginning of the year, exports to Turkey grew more than 10.5 percent and exceeded 143 billion dollars. Only cars were sold for more than 26 billion dollars! Also, the main export items in Turkey are the textiles, which is considered to be one of the best in the entire world with its agricultural products.

Turkey’s relations with other countries
Turkey’s position in the region and the world has strengthened. Many neighbour countries call Turkey a guarantor of peace and tranquillity in the region. The country’s president Recep Erdogan and Turkish politicians actively participate in various international campaigns, establishing and strengthening ties between countries. Great attention is being given to Africa and Asia, also, economic and political relations are maintained with the United States, Europe and the former CIS countries.

But probably the breakthrough of the year was the restoration of relations with Russia. This year Russia’s president Vladimir Putin and Recep Erdogan held dozens of phone conversations and met personally almost every month. And this had a positive impact on the economy of Turkey and Russia and made the two countries closely linked with trade, cultural and political relations.

Power Engineering
A lot has been done in the energy department of Turkey this year, especially in the terms of implementing international projects. Therefore, at a shock rate of 4 km per day, laying of the pipes of the Turkish gas pipeline is still continuing. Recall for the first branch, the construction is planning to be completed in the spring of 2018, blue fuel will be supplied to Turkey. And also for the second part which will be completed in 2019, gas will reach to Europe.

Another big project will be finding oil and gas in the Black and Mediterranean Seas. Especially for this purpose, a drilling vessel was purchased, which will begin to work shortly.

Great attention was paid to alternative sources of energy in Turkey this year, for example, 8% of electricity is already being produced by wind power plants.

Tourism
This year has become one of the best sphere of tourism. According to preliminary data, the number of tourists by the end of 2017 will exceed 32 million people. And the gain from tourism will be about 26 billion dollars.

After strengthening our ties with Russia, travellers and tourists from Russia who missed the sun literally poured into the country. Almost five million Russian citizens visited Turkey on vacation time this year! In general, not only Russian citizens visited this year, there were also citizens of other countries of the former CIS, which became much more active. And also, residents of Kazakhstan, Uzbekistan and Ukraine visit Turkey more and more willingly.

Russia’s increase on tourism took the top tourism market of Turkey by taking a 15.7-percent share in the total arrivals in the first 10 months of the year, the increase was followed by Germany and Iran, which took 11.5 percent and 7.3 percent of share. Also, Georgia and the United Kingdom ranked fourth and fifth on the list.

Also, German tour operators have shown an increasing demand for holidays in Turkey, said the head of a leading tourism association in Germany. He also noted that the last-minute reservations to Turkey have increased during summer and fall 2017.

And thanks to the restoration of the tourism sector, which last year suffered from significant losses, now there are hundreds of new hotels planning to be built. An increase in employment is being expected in this area with the opening new places for international tourists. Next year, Turkey expects that the tourist flow will increase up to 36 million people. And judging by the fact, already actively booking vouchers for spring-summer of 2018 is quite possible.

Real estate
As expected, real estate sales brought such success. From general indicators, it does not lag behind, it confidently goes up. On average, sales growth is about 15% more, when you compare it to last year. There are hundred thousand transactions for the purchase and sale of real estate monthly in Turkey. For example, according to the latest data, in November, more than 122.5 thousand properties were sold. Market experts say that the goal of half million sales of apartments and villas in the whole country is quite feasible.

As for the sale of real estate to foreigners, the number also keeps growing. On average basis, about 2 thousand transactions are carried out every month. It is expected that by the end of the year the owners of Turkish properties will be more than 20 thousand foreign citizens. This is facilitated by the excellent conditions that are being offered to foreigners.

Throughout the year, purchasing properties most often happen in Istanbul, Antalya and Ankara.

And with the construction and launch of the BTK railway, the construction of the third Istanbul airport, which is promised to become one of the largest in the world, modernization in education and medicine and many plans and projects happening, Turkey is developing.

So on the eve of the new year, we can safely say that Turkey in 2017 was its best and worthy of 2018. We are happy that we live in such an amazing country! We will help you on your journey of purchasing a property here!